Posted on October 27, 2017 by The Macdonaldtown Bicycle Club

Anderson’s Terrace (20 to 32 Park Street, Erskineville) is located on the eastern side of Park Street, close to Solander Park. Originally a row of six two-storey terraces, the relatively recent incorporation of an additional terrace at the southern end of the row (number 32) makes seven.

The earliest identified reference to Anderson’s Terrace within newspapers is in the form of an advertisement offering No. 1 Anderson’s-terrace for rent:

The advertisements kept appearing. With little variation, advertising for the letting of Anderson’s-terrace continued throughout the remainder of 1885, for the duration of 1886 and beyond until around March 1887:

The 1885 Borough of Macdonaldtown Assessment Book shows a change in ownership of land in Park Street, with the name ‘Arthur Long’ crossed out and overwritten with the name ‘W. A. Anderson:’

The following year the 1889 Borough of Macdonaldtown Assessment Book records a completed terrace of six houses under the ownership of W. A. Anderson. At the time of the assessment two houses appear to have been unoccupied:

The ownership of Anderson’s-terrace by H. Thompson seems to have been similarly short-lived. The 1888 and 1889 Assessment Books showing ownership of the terrace by the Federal Building Society:

Arthur Nott was the next person to attempt to make a go of the terrace, the Assessment Books listing him as the owner in the 1890 through to 1894 editions. He appears to have not fared well, and in May 1892 the terrace was offered for sale by auction ‘by order of the Mortgagees:’

The terrace appears to have remained unsold, however two years later, and coinciding with the liquidation of the Federal Building Society the property was again put to auction:

A report of the sale published on Monday 1 October 1894 provides the following details of the sale:

Yep. 1200 pounds for a row of six terraces in Erskineville…

Anderson’s-terrace is depicted in maps published by the Surveyor General’s Office in the 1890’s, and given its location on the Erskineville-Alexandria Municipal boundary it is captured in the mapping of both:

In 1881 a toll-bar was erected on Erskineville Road (now Railway Parade) to generate funds to compensate for the damage caused to roads by drivers of brick-carts and the like who were evading the Newtown tolls. The toll-bar remained in place until 1890. The location of the toll-bar is recorded in this map of 1886: 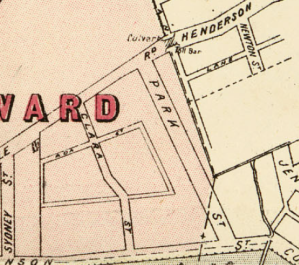 Like Loading...
This entry was posted in 1880-1889, 1890-1899, Park Street, Terraces and Houses and tagged Erskineville, Erskineville History, Inner West, Macdonaldtown. Bookmark the permalink.