Posted on April 10, 2017 by The Macdonaldtown Bicycle Club

In 1919, Daisy of Erskineville submitted her recipe for Dripping Biscuits to the ‘Women’s Sphere’ page of Sydney’s The Sun Newspaper. Daisy’s recipe appeared in the ‘Housewives’ Exchange’ column: ‘any kind of useful wrinkle concerning the home-cooking,
dressmaking, care of children-will find a place in this column.’
The recipe for dripping biscuits appeared amongst several recipes submitted by residents of Sydney, which included wheatmeal pastry, apple strudel, sponge cake, carrot pudding, and honey toffee.

Daisy’s recipe uses dripping, or beef fat in place of the butter or oil that most biscuit recipes tend to use today. In 1919 beef dripping would have been an inexpensive ingredient, a by-product of family cooking, dripping being the fat that dripped from roasting meat. Today, beef dripping is sold at the supermarket at great expense as a gourmet ingredient.

The recipe appears pretty straight forward right up until the direction is reached to add ‘sufficient flour’ and ‘bake in a brisk oven’ and finally ‘a little cornflour added to the flour is an improvement.’ How much? How hot? For how long?

Would that be a Britsh Imperial measure of sufficiency?

Well, there’s nothing for it but to pre-heat the oven to ‘brisk’ and get down to business with a beater and some rendered beef fat…

There are some modern recipes for lemon-sugar biscuits that provide some guidance for this 1919 recipe. All use butter in place of the dripping, so if a slight departure from Daisy’s recipe is preferred consider this recipe for lemon sugar cookies, or these lemon and condensed milk biscuits.

Method:
1. Preheat oven to 180º Celsius. Line a baking tray with baking paper.
2. Place dripping in a mixing bowl, and using an egg-beater, beat dripping until stiff peaks form.
3. Start adding the two cups of caster sugar. Continue beating to incorporate the sugar into the dripping. Continue beating, adding the lemon rind and milk.
4. Sift flour and cornflour into the batter, incorporating one cup at a time.
5. For a firm dough chill in fridge for two hours prior to rolling. Otherwise, take teaspoons of dough and roll them into balls, then place them on a greased baking paper.
6. Bake at 180º Celsius for 17 to 20 minutes, or until starting to brown underneath. Allow the biscuits to cool on a cooling rack.

These quantities make about 1250 to 1300ml (5 cups) of biscuit dough (several sufficiencies worth). Left-over dough may be frozen following these instructions.

[A first trial of these biscuits baked in a ‘brisk oven,’ said to be round 220º Celsius produced burnt edges at the 8 minute mark].

The Metters ‘Triumph’ Oven
So we have established that Daisy’s recipe works in a modern oven; but how will it perform in a Metters oven? Given Erskineville’s association with Metters the opporunity to try Daisy’s recipe in a Metters stove could not be passed up!

Metters stoves were first produced in the late 1800s in Adelaide. With the success of the stoves a Perth factory was opened in 1896; and in 1902 a small factory opened in Alice Street Newtown. The Newtown premises was quickly overwhelmed and in 1906 20 acres of land was purchased in Alexandria and a new factory built. An additional 10 acres was added to the site in 1937 (The Story of Metters, 1965). The extent of the Metters factory extending from Alexandria and Erskineville is shown in the City of Sydney Building Surveyor’s Detail Sheets 1949-72. The residents of Erskineville and Alexandria could even tell the time of day from the factory whistle eminating from the Metters Factory. 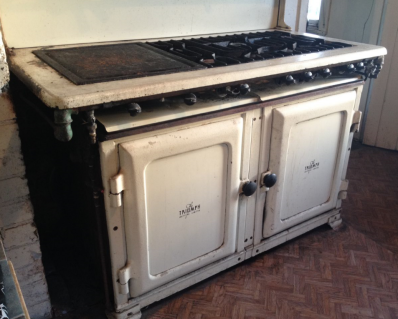 Legend has it that this stove first saw service in a pub in Mittagong. Today in retirement, it does occasional service in a shearers’ quarters kitchen not far from the NSW town of Crookwell.

Whilst there is not much information available to establish just how old this particular oven is, ‘The Triumph’ does feature in the 1936 Metters gas stove catalogue: 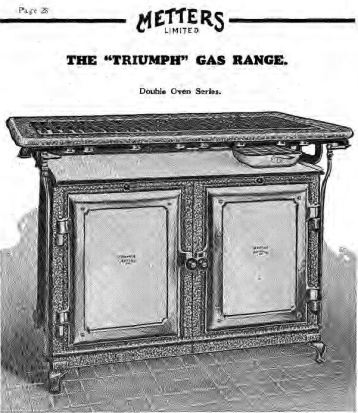 Keen-eyed Metters enthusiasts might have noticed that this stove is fitted with an accessory plate rack and an automatic oven heat controller (‘why cook by guesswork?’). Not that the temperature guage serves anything more than a decorative purpose today. This oven has two settings only: ‘Off’ and ‘Flaming gates of hell.’ 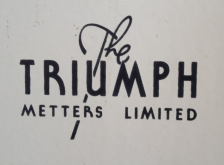 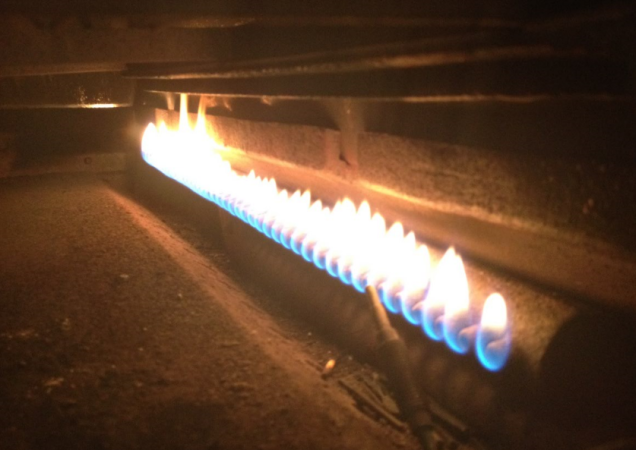 The combination of Daisy’s Erskineville biscuit recipe and the Erskineville oven was met with success! Well, initial success… The first batch of biscuits came out perfectly after the standard 17 to 20 minutes, but given the lack of temperature modulation (and baking without the convenience of an oven window) saw the subsequent batches well-cremated!

Any news of attempts at Daisy’s recipe; or any of the other recipes featured in the the October 1919 ‘Housewives’ Exchange‘ will be gladly received!