Posted on October 17, 2016 by The Macdonaldtown Bicycle Club

Eden Terrace (10 to 14 Charles Street Erskineville) is located on the eastern side of Charles Street (known as George Street prior to 1912), between the railway line and Albert Street. Originally a row of seven two-storey terraces, three remain today.

The first mention of the row that would become Eden Terrace is an invitation for tenders for brickwork by Peter James of Swanson Street in February 1887, and a subsequent tender for plastering and plumbing in March 1887:

By July 1887 the houses appear to have been completed, and were offered for rent for 10 shillings a week:

The first mention of the houses as Eden Terrace occurs several weeks later, with two remaining houses offered for rent:

Here are the first appearances of the residents of Eden Terrace in the 1888 Macdonaldtown Council Assessment Book; and the 1889 edition of the Sands Directory: 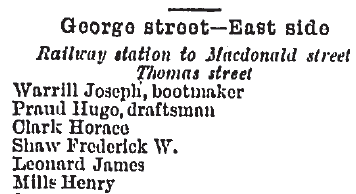 Subsequent references to Eden Terrace depict the regular goings-on of suburban Sydney life. Lost animals, births, rental advertisements and some on-the-quiet home business activities. The original numbering of the terrace (as 1 to 7 Eden Terrace) corresponds with the modern numbering of the street (as 2, 4, 6, 8, 10, 12 & 14 George/Charles Street).

No further references to the row as Eden Terrace have been identified from the newspapers, but of course life went on for the residents with pleas for the return of a lost diamond ring (1907); request for a sailing boat (1923); and furniture for sale (1924 & 1930).

In 1914 number 4 Charles Street Erskineville and the story of May Allport ‘the little girl with the Rickets’ appeared in advertisements around the country for Dr. William’s Pink Pills. Here below is the advertisement. There is more about May Allport at Neighbours Astounded – Little Girl Wonderfully Restored to Health.

The following commemoration appeared in the Evening News on 28 July 1891: 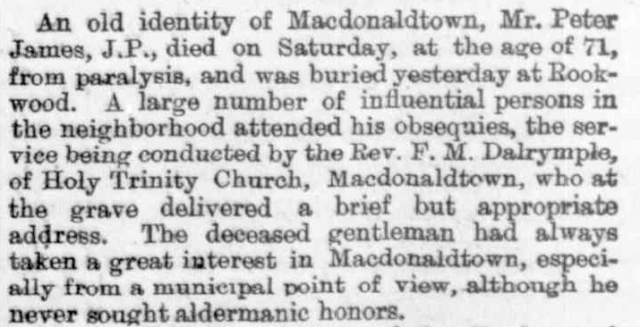 Peter James was appointed as a ‘Trustee of the land at Macdonaldtown, resumed for the purposes of  a Public Park’ (Macdonaldtown Park) in 1885; and was for a time the Macdonaldtown Park caretaker. Following his passing Alderman John Baldwin passed a motion at a meeting of the Macdonaldtown Council on 10 August 1891 that a letter of condolence be sent to Peter James’ widow, further adding to the motion ‘that the deceased gentlemen had always taken a great interest in municipal work and had been the means of many improvements being effected.’

Peter James owned several properties in Erskineville and beyond, the extent of which was revealed at the dissolution of his estate (after the passing of considerable time) in 1902:

The row originally contained seven houses adjacent to the original location of Macdonaldtown Station (depicted in this map of 1886). Number 2 was demolished around the time of the railway duplication and quadruplication works of 1891-2. Here is an extract of a map published in 1894 showing Eden Terrace as a row of six at the time (the two weatherboard cottages in Thomas Street are also shown): 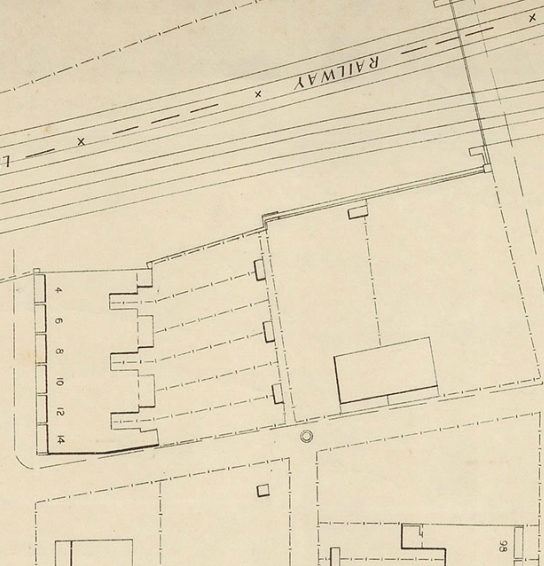 Numbers 4; 6; and 8 would be demolished with the further widening of the railway in 1925.