Posted on July 6, 2016 by The Macdonaldtown Bicycle Club

Poor Macdonaldtown Station. It really has copped some flak over the years.

Within a month, further complaint had been raised in the letters section in relation to the useless and miserably small platform: 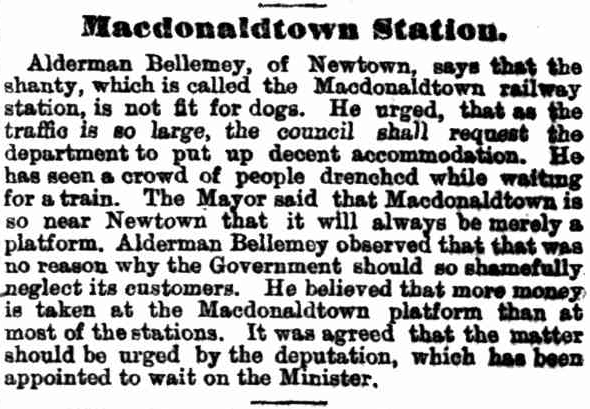 With the Railway Duplication and Quadruplication works of 1891-2 the platform was relocated from its original location (depicted in this map of 1886)  to its present location on Burren Street: 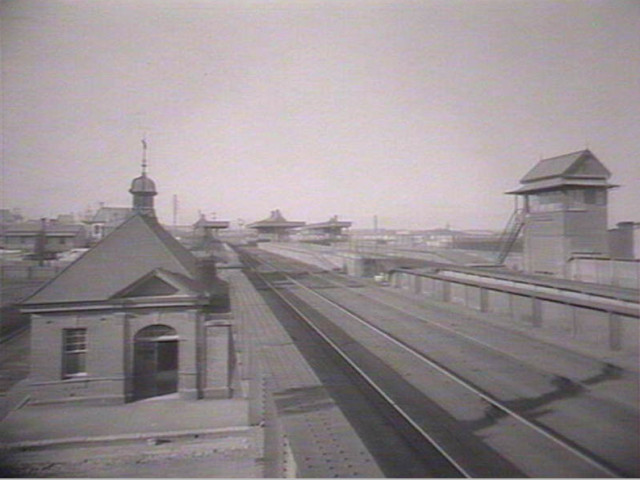 Sadly the relocation did nothing to improve Macdonaldtown Station’s lot.

On 19 February 1947 police officers used Macdonaldtown Station to set a trap to recapture two escapees from the Redfern Police Station, with an unnamed ‘high police officer’ quoted as saying “Macdonaldtown is the loneliest railway station near the city:”

And more recently? Well, little has changed, with Macdonaldtown Station continuing to be on the receiving end of derogatory comments:

Fear not! For thirty years ago something wonderful happened to the platform at Macdonaldtown Station. In the words of the artist/vandal (depending on your position)  the ‘large grey scar on the landscape in  the middle of an even larger scar, an immense industrial wasteland’ had been ‘enhanced.’

On Sunday 13 July 1986 travellers arrived for their morning journeys to find the platform of Macdonaldtown Station had been painted pink. Whilst the perpetrator initially escaped the clutches of railway police, he later handed himself in for questioning by railway detectives. Two months later on 18 September 1986 the station Picasso appeared on a charge of ‘maliciously injuring railway property’ at Macdonaldtown station:

Consider the planning involved! Pre-painted chairs, a table, a pot plant and an accomplice! And the outcome – the prosecuting Sergeant questioning the size of the compensation claim, and the magistrate acknowledging that the paint job ‘may have created something which was more aesthetically pleasant that what it replaced.’

Discharged! Without a conviction!

Rumours have circulated ever since as to the perpetrators, timing and even the colour of the repainting of the station:

COLUMN 8
SOMEONE has doctored police signs near Sydney University and Homebush, so that instead of SEATBELTS, or SPEED, they read, in Dayglo:
POLICE are targeting
WIGS
AN anonymous fax we’ve received claims this is the work of a group calling itself The New Extremists. They accept responsibility for painting Macdonaldtown station purple three years ago “to pacify the alarmingly aggressive and ill-tempered Sydney public using pastel shades”. Now, the fax says, “Sydney faces a far greater threat … wigs and hairpieces are one of the vilest means by which the temple of humanity can be desecrated and we firmly believe they should be outlawed. People must learn to accept and cherish their own identity, instead of attempting to conform to the expectations of magazine editors and television producers.”

In the words of the Macdonaldtown Picasso, ‘I think the SRA should paint Macdonaldtown Station pink again.’  Please, Sydney Trains?