Posted on December 9, 2015 by The Macdonaldtown Bicycle Club

‘There is no form of indigestion or biliousness that will not yield to Mother Seigel’s Syrup.’

Mr. Thomas Butler of 41 Flora Street Erskineville suffered horribly from severe indigestion and stomach cramp before finding relief from a bottle of Mother Seigel’s Syrup, in which he found a complete and thorough cure.

From July 1908 Mr. Thomas Butler’s story of his return to health featured on a regular basis in publications all over Australia. The earliest appearance identified to date appears below:

Towards the end of September 1908 a change appears in the advertising. No longer was it enough for Mr. Butler’s enthusiastic testimony to carry the weight of convincing the public of the benefits of Mother Seigel’s Syrup, and the art department was called into action: 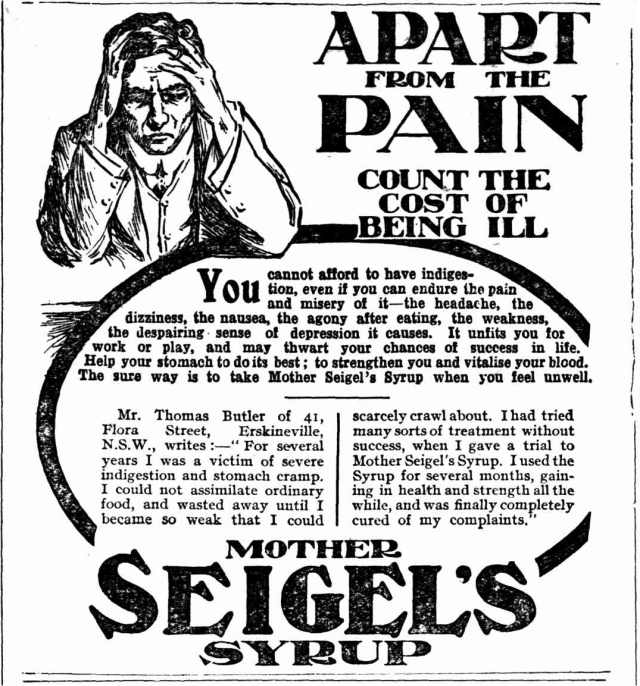 For several months there was silence and the story appeared to have run its course. However, in July, August and September 1909 Mr. Thomas Butler’s testimony received a reprieve and was again republished, this time as part of a half page advertisement that included a similar story of a return to health from Mrs. Winifred McKay of Lygon Street North Carlton (Vic). Again the creative department had made some changes and the image of a man wracked with pain had been replaced by a much friendlier looking character:

“I only pray for simple grace
to look my neighbour in the face
full honestly from day to day.”

Here is a description of the house from a sales notice of 1903 shortly before its occupation by Mr. Thomas Butler: 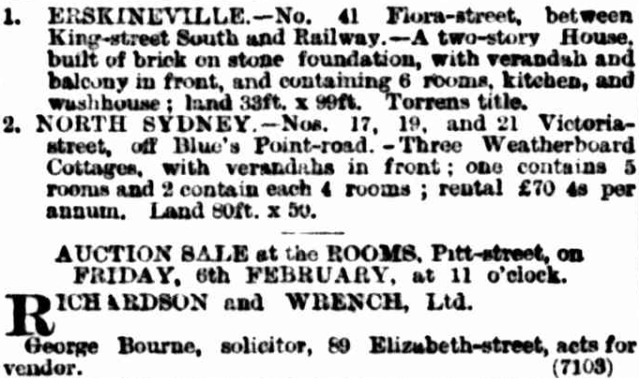 The Spectator Magazine of 18 December 1908 p21-22 citing the British Medical Association reported the ingredients of Mother Seigel’s Syrup as follows:

Similarly, the journal of the Melbourne Medical Students’ Society Speculum  issue 77, May 1910 p13-19 citing the British Medical Association states ‘Mother Seigel’s Syrup is made up with HCl. Tinct : Capsici, and aloes with treacle and water.’